History of the Parish

Archbishop John Mitty of San Francisco established St. Apollinaris Parish and appointed Rev. Parnell McCarthy as pastor on June 24, 1957.  Daily Mass was offered in a duplex on Solano Avenue and Fr. McCarthy's residence was on the other half.  Sunday Masses were in the Grange Hall on Orchard Avenue using altar furnishings donated by a San Rafael family.

The Women's Guild was organized in September 1957 and the Men's Club, originally the Holy Name Society, was organized in 1958.  1958 also saw ground breaking for the first parish buildings.  Unfinished classrooms served as the first church.  The rectory and one wing of the school were completed the summer of 1959 and Lassen Street was paved.  The woodworking, incuding altar railings, pedestals, lecterns and confessionals were crafted by talented parishioners.

By July 1959, a tract home adjacent to the parish property was remodeled and readied for the Irish Sisters of Mercy, who arrived in August.  School grades 1 to 3 opened for the first time in September 1959.  The school office and parish maintenance were organized and staffed completely by volunteers for the first three and a half years.

Right Rev. George Shirle, who was appointed our second pastor in September 1960, served the parish for 15 years.  Every year from 1960 to 1964, an additional grade level was added to the school program.  The church hall was completed in May 1961 and the first Mass was celebrated on May 21, 1961.  The Archdiocese of San Francisco was expanded so that a new division was formed in 1962.  St. Apollinaris parish became part of the Santa Rosa Diocese.

Being now well established, the parish laity formed a parish council and a number of youth groups to provide both social and spiritual growth.  The Saint Vincent de Paul Society, a Catholic lay organization, offers person-to-person service to those who are in need or suffering.  St. Apollinaris parish has been and is still very generous in its support of the Society. The CYO is another lay organization that St. Apollinaris became active in and continues to support.

The fall of 1966 also witnessed the modernization of the church sanctuary in accord with the new liturgy of the Second Vatican Council.  The renovation was completed in time for the Christmas Masses.

In 1967 the parish consisted mainly of very young families with very young children, living in very new homes, burdened with new mortgages, and struggling to meet the new challenges that all young families must face.  In contrast, Bill and Anita Gaffney were an older couple of some means who had already raised their own family and were now called to "parent" this new parish "family".  They were a shining example of caring and generosity.  The St. Apollinaris School library still benefits from The Anita Gaffney Foundation, a trust fund established by the Gaffneys.

On May 28, 1967, in appreciation of the Gaffney's efforts on behalf of the parish, the Holy Father honored Bill Gaffney with investiture as a Knight of St. Gregory and Anita Gaffney with bestowal of the "Pro Ecclesia et Pontifice Medal".  Bill and Anita have long since been called to their eternal reward, but the example of their lives remains an inspiration to us all.

By the 1970's, the Marian Visitors and the Legion of Mary were all well established in the parish community.  The Italian Catholic Federation, whose St. Apollinaris branch began in 1977, has been one of the most active organizations.  June 9, 1975, Fr. Patrick Gleeson became the third pastor of St. Apollinaris.  At the time he became pastor, the parish had incurred a debt of $550,000 in developing the hall church.  Fr. Gleeson led the successful effort to eliminate the debt, and as the parish matured, the diocese agreed to the building of a new church.  Also during this time, the Men's Club completed work on the present athletic field for the use of the school children and others.  The Altar Society began its work of caring for church decoration, altar cloths and vestments.

Serious preparations for the new church were undertaken in 1984 and January 1985.  Fr. Michael J. Cleary became the fourth pastor of the parish, just in time to become involved with the major fund drive organized by th parish Finance Committee for the new church.

Sister Peggy Cruise began direction of the Religious Education program in 1986 until her "retirement" in 2015.

The full maturation of St. Apollinaris is reflected in additional institutional and organizational changes.  The Men's Club organized an annual auto raffle, a popular Bible Study group, meeting since 1987.  A charismatic prayer group and the Engaged Encounter group, to prepare couples to better understand the Sacrament of Marriage, were established in 1985.

In the summer of 1986, construction began on a new school building.  It would house the kindergarten and first grade classrooms, school library, and a science lab.

In September 1988 the site of St. Apollinaris was dedicated and construction began.  The new church was completed in November and dedicated on November 26, 1989, the Feast of Christ the King.

Parishioners have been assisting in teaching and welcoming new members into the Catholic Church through the RCIA (Rite of Christian Initiation of Adults) program.  The St. Apollinaris School parent organization, MERCY (Making Education Reach Catholic Youth), has the responsibility of raising funds for the school.

The Knights of Columbus, Alemany Council, was founded in 1905.  St. Apollinaris works with that chapter.  The K of C provides funds for various projects, high school scholarships and local community programs.

After the completion of the church, focus returned to the needs of the young people.  The groundbreaking and dedication of the gymnasium took place on October 11, 1998.  It was completed in 1999 and a dedication ceremony was held on November 22.  A basketball game was played by the 8th grade boys, St. Apollinaris vs. St. John the Baptist.  St. A's was blessed with a victory!  The gym is used by the entire community.  Thanks again to a successful building fund campaign and countless parish volunteers.

In October of 2001 Fr. Cleary retired.  The parish held an elegant retirement dinner in his honor.  Msgr. Joseph Alzugaray arrived in September 2001 and became the parish's fifth pastor in October of that year.  Msgr. Joe built on the momentum already started by Fr. Cleary.  Our church, school and grounds continued to see improvements and beauty flourished. 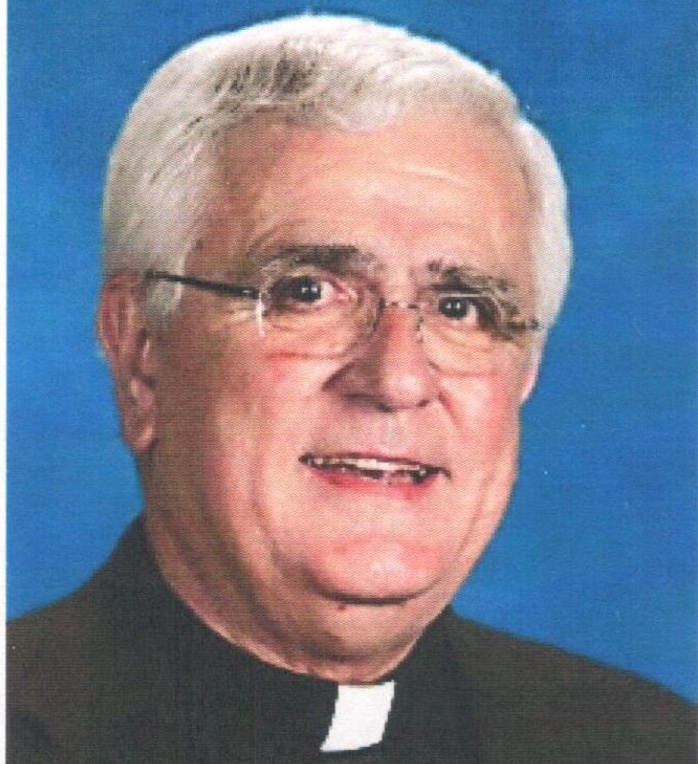 Construction of a new computer/communications lab began in 2001.  Fr. Michael Cleary lost his battle with cancer and passed away on March 27, 2002.  The new computer lab was completed and dedicated in September 2002.  Msgr. Joe began the creation of Cleary Park to honor Fr Cleary's many years of leadership, guidance and dedication to St. Apollinaris Parish.  Ground breaking took place in 2002.  Since the park's completion it has served as a beautiful setting for many parish and school functions.  The park is also used by many of our parish families for weddings and celebrations.  In 2006 a beautiful promenade was built between the hall and the school.  It is an inviting entrance to the many events held in our parish hall.

Msgr Joe will be remembered for his dedicated ministry to his vocation to the priesthood for over 46 years. He knew his parishioners by name, by family, and by need, and ministered to them all.  He was at ease with every age group, supporting the elderly, families, high school youth, school, and religious education programs.  He was actively involved in all aspects of parish life, but his greatest talent was his abiility to communicate.  He brought many into the church simply through his wonderful homilies.

Msgr. Joe retired on October 31, 2011, and after a prolonged illness, passed away in January 2014.  Our parish is now lead and guided by Fr. William Donohue.  The vitality of St. Apollinaris Parish will continue on in the many apostolic works and ministries of our parish as well as in the countless volunteers and generosity of our church community.  We will continue to build on the vision of those who sacrificed so much to see the reality of St. Apollinaris come to fruition.  We are grateful for the Lord's many graces and as a faith community, we gather joyfully to celebrate life, faith and love in Jesus Christ.

The History of the Building of Our Church: Inspiration and Vision

Our church building has a Romanesque flavor, but the roof tiles and stucco also give more than a hint of Spanish mission, appropriate to a church in California. All major elements of the church design were consciously chosen.  The Celtic Cross, for example, was adopted to honor the Irish Sisters of Mercy who have devoted so much love and attention to the parish children from its earliest years.

Devotion to Mary is expressed in the front window of the church, a stained glass representation of Pentecost.  As the Church entered the world through Pentecost, we enter our church bathed in the light of the stained glass commemorating that event. Mary, the mother of the Church bids us enter and be filled with the Holy Spirit as were the apostles, her companions at the first Pentecost.

Above the altar are the four evangelists. That choice symbolizes the significance of the Word of God, the gift of the Word of God Himself.  The gaze is down toward the sanctuary where the Liturgy of the Word receives its enlarged emphasis in the post Vatican II liturgy.

While eras change and the form of involvement of the faithful changes as well,  we see today evidence at St Apollinaris of the devotion of the faithful in continuity with those who built the great cathedrals and modest chapels of Medieval Europe.